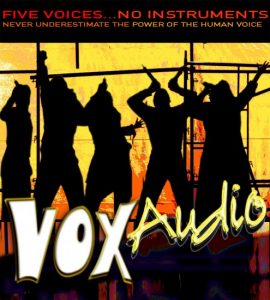 Vox Audio was born as “Toxic Audio” at the 1998 Orlando Fringe Festival. The concept was simple: create a fun, interactive theatrical show, where the star was the human voice. The show was an instant hit with fans and critics, hailed by The Orlando Sentinel as “surprising, dazzling, and brilliant”.

Soon the Vox Audio garnered national attention with appearances on ABC-TV, FOX, and ESPN 2’s “Cold Pizza”. Their album, “Chemistry” was named “Acappella Album of the Year” by the Contemporary Acappella Society of America and was featured on radio stations across the country, including Sirius Satellite Radio.

In the years following, Vox Audio performed for sell-out crowds at the Luxor Hotel and Casino in Los Vegas, and toured internationally throughout parts of Asia, South America, and Europe. Wherever they go, Vox Audio continues to delight audiences world-wide by exploring the boundaries of the human voice.