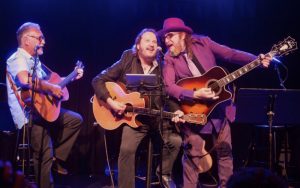 Laurel Canyon is an acoustic tribute to the music of Crosby, Stills, Nash and Young. Featuring recreations of their seminal works as well as songs from their early bands and their solo years, Laurel Canyon is a trio consisting of Grammy Award winning writer/producer Mark Hudson, one of the Hudson Brothers Hall of Fame Songwriter Gary Burr, and singer songwriter Mark Mirando.

The bios of this world famous trio reads like a who’s who of rock n roll royalty. Mark Hudson was the producer of over twenty albums by Steven Tyler and Aerosmith as well as over ten albums by Ringo Starr. He has written and produced hit songs for Cher, Elton John and produced the Eric Clapton hit “Tears in Heaven” Gary Burr is a member of the song writers hall of fame. He has written dozens of songs for Reba McEntire, The Oak Ridge Boys , Juice Newton and many others. He was a member of the hit group Pure Prairie League. Along with hit singer, song writer Mark Mirando make up “Laurel Canyon”, the premier Crosby, Stills, Nash and Young tribute in the country.