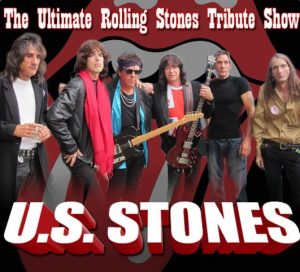 The U.S. Stones are the only Rolling Stones Tribute Band to have a young in his prime Mick Jagger clone with all the moves and signature voice. Their Keith Richards is dead on and their Ron Wood gets mobbed because he looks just like the real deal. This is like seeing the Stones in the mid-70s at the height of their career.

This is a 8 piece band with keys, horns and more, just like the real thing, no tracks and as authentic as it gets. It’s an amazing full sounding Rolling Stones event that will blow you away with hit after hit!

The U.S. STONES have played large festivals to 20,000 in Ft. Myers for New Year’s Eve, were chosen by the Miami Dolphins to play their huge Landshark Stage, to playing great venues like Jannus Live St. Pete, Daytona Band Shell, B.B. Kings and more, and are available anywhere in the US.