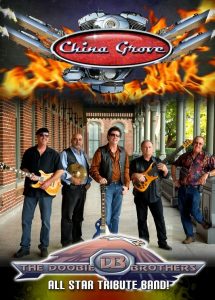 China Grove is a fantastic Doobie Brothers tribute band from the Tampa Bay area, who’s repertoire spans the many decades and styles of the legendary California group. From the jammin’ rock of “Long Train Runnin” to the jazzy “Takin’ it to the Streets”, to the Grammy award winning pop of “What a Fool Believes”, this group blazes through a sizzling set of memory-jarring classic hits and album cuts with stunning accuracy and passion. Let’s just say these guys “bring it”!

So lock up the liquor cabinet and tie down the storm door ‘cause China Grove is headed to your town!