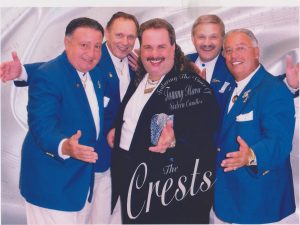 The Angels Listened In

A Year Ago Tonight

At the end of his career, The Crests’ lead singer Johnny Maestro handed the mantle to Tommy Mara, a vocalist extraordinaire in his own right, who has led the hit recording group to performances that have entranced

A powerful singer with and an incredible stage presence, Tommy Mara leads the vocal group whose tight harmonies continue to thrill audiences worldwide.

Once referred as “The Pavarotti of Doo Wop”

Now, Mara is dubbed the “The Meatloaf of Doo Wop.”

The Crests’ most beloved hit, “Sixteen Candles” has

been featured in films such as “American Graffiti,”

Thrill to a top flight show that brings back

the era of Golden Oldies!