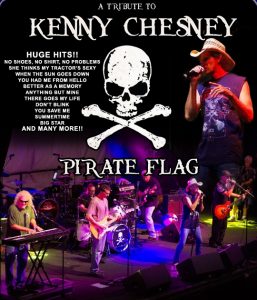 Kenny Chesney has recorded 15 albums, 14 of which have been certified gold or higher by the RIAA. He has also produced more than 30 Top Ten singles on the U.S. Billboard Hot Country Songs charts, 22 of which climbed to the top of the charts. Chesney has sold over 30 million albums worldwide!

The Pirate Flag Band is an awesome Tribute to this fantastic artist! They perform all the huge smash hits, put on a high energy fun show with look-alike and sound-alike lead singer.. Just the perfect band for events and top venues!