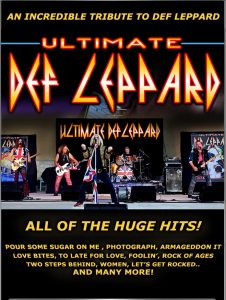 The boys have spent literally over 1000 hours in the studio recreating the multi layered vocal harmonies, and with that plus amazing live vocals and the incredible stage production involved, you get the closest thing to the original album versions as possible! This is exactly what the real band does, so we bring you a really fantastic facsimile of a real Def Leppard concert. No tribute wigs, this is all about the music and high energy performance.

As one of the world’s best-selling music artists, Def Leppard have sold more than 100 million albums worldwide, and have two albums with RIAA diamond certification, Pyromania and Hysteria. They are one of only five rock bands with two original studio albums selling over 10 million copies in the U.S. The band were ranked #31 in VH1’s “100 Greatest Artists of Hard Rock” and ranked #70 in “100 Greatest Artists Of All Time”.